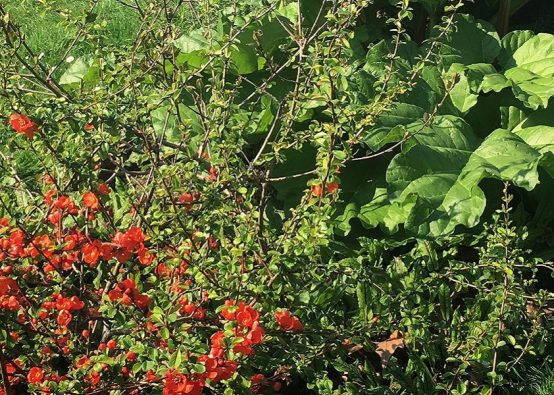 Forest gardening is an exciting concept, supporting the creation of a forest type space, using different canopies, and making a space that is both beautiful and productive. Whilst it can be complicated working out how many canopies a space can use, forest gardens are the ideal design mechanism for large and small areas, especially in urban spaces where the tree canopy needs to be improved.

But what are they and how do they work? A forest is made up of canopies of plants that start with ground cover, then has herbaceous perennials, then shrubs, then a small tree canopy and a large tree canopy. Climbing plants will grow up the trees and bulbs will appear in spring along with other plants that enjoy the light that comes through the deciduous trees before the new seasons leaves appear and all the plants are interdependent on each other and the other species that live in, on and around them. The forest is the perfect circular economy, in that it restores and nurtures itself throughout the seasons, with deciduous trees losing their leaves each autumn and those leaves creating the leaf mould that supports the plants and fungi that make up the forest.

Forest gardening is a permaculture design concept that uses this natural design concept but replaces the forest plants with edibles and plants and trees that are useful to us as humans. So instead of oaks or ash, as the tall canopy, large productive trees like walnuts or mulberries are used. The smaller tree canopy is replaced with smaller fruit trees like apples and trees that are grafted onto smaller rootstock  and that is followed by edible shrubs such as currants, roses for hips and willows and hazels which of course are good for nuts and poles for growing beans and peas. The herbaceous layer can be onions, perennial vegetables like Daubentons Kale and artichokes and the ground cover might look like strawberries, violas and Nepalese raspberries. Some annuals might be added but it’s important to remember not to add anything that might need constant watering or inputs as the point of a forest garden is that it looks after itself with minimum input. Adding a layer of edible fungi brings the mycelium that forests rely on into the mix too.

But what does this look like in our towns and cities and is it a useable concept? Imagine a street with it’s planting. It would be fairly simple to swap the usual species of trees to large productive trees? Or even to smaller fruit trees like pears, many varieties of which are very upward growing and ideal for small spaces. Planting fruit bushes, species roses for hips, artichokes and kales and herbs rather than the usual cotoneasters and hebes would support a layer of shrubs and herbaceous plants like day lilies and sea kale and herbs could replace the herbaceous layer that might be planted in areas. Often we see Vincas planted as ground cover in towns and cities and it would be easy to replace these with wild strawberries for example. Of course by choosing carefully this type of planting scheme could transform our towns and cities into huge forest spaces, with the planting cooling the city in summer, and supporting insects  in a way that much of our traditional planting fails to do.

But as well as this being a great way to design the natural world into the city, there are other spaces that cry out for this type of complex planting. Roundabouts, junctions, railway sidings, scrub areas of parks, playgrounds, hospital grounds , car park edges, to name a few would all be great as forest gardens, supporting not just an urban harvest but also adding all the other benefits of good planting in urban areas.

We know lots of Incredible groups are already working on forest gardens-why not tell us the story of yours? For more information about forest gardens look at www.agroforestry.co.uk 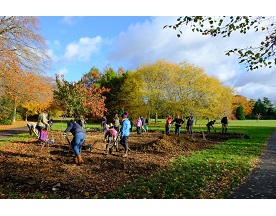 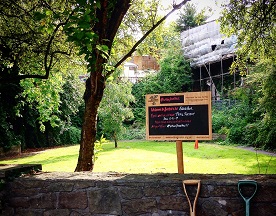 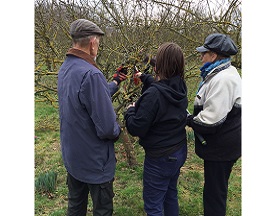